Another new CA to experiment with.

The idea for these came from a comment Tsui Kagura left on one of my YouTube videos.

Can you make a CA that is 4D ( or 5D etc ) in a sense, that you use 2 (or more) different regular CA rules, run them in the same space (same coordinates), same time (same steps), but then, based on some kind of rule also have them interact with each other?As if they were neighborhoods from another dimension. I assume we could only be ‘seeing’ one of them, the rest would be in a hidden dimension, but affecting the one we’re looking at. If there are more than one hidden dimensions, they could affect each other too, maybe using a different rule between them…

Using multiple rules on the same CA is something I have not experimented with before, so I had to give it a go.

To start off I used the simplest 2 state 2D CAs. The extension from a usual 2D CA is simple enough. You run 2 rules over the same grid. Store the results of each rule (either 0 or 1 for dead or alive) and then you use the results of the rules to set the new cell state.

How the 2 rule results are converted into a new cell state is the tricky part.

For two 2D CA rules there are 4 possible outcomes (dead dead, dead alive, alive dead, alive alive). So depending on the result states I have 4 options for alive or dead. This gives the following options. 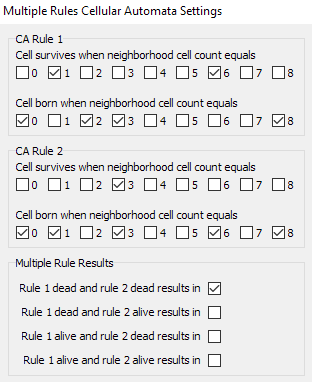 Here are a few sample results after trying hundreds of random rules.

I will update this post if I find any more interesting results. There are many more extensions to try like 3D, 4D, 5D, larger neighborhoods, more than 2 rules, etc.

I did try the 3D version of multiple rules. Nothing worth posting as yet. I used both the result1 and result2 method above and also tried feeding the result of rule1 into rule2. Neither has given any unique looking results yet.