I am a huge fan of anything related to fluid simulations. This interest was once again sparked when Daniel Shiffman covered fluid simulation in his latest Coding Train video.

As always, I recommend Coding Train to any developer. Dan has a unique way of making his programming topics both interesting and entertaining.

The code converted during the Coding Train video (Mike Ash’s Fluid Simulation For Dummies) is based on Jos Stam’s Stable Fluids code.

Jos Stam wrote his seminal paper Real-Time Fluid Dynamics for Games back in March 2003. I have lost count of the times I seen the paper cited or linked to. It has had a huge influence on fluid simulation.

The original source code from the paper is provided here and here.

Going back 11 years, one of my first YouTube videos was this super low resolution example of 2D fluid simulation using Stam’s methods.

My main objective when revisiting Stam’s stable fluids was to get a 3D version going.

A quick Google search led me to Blain Maguire’s implementation which I was able to translate into a working 3D fluid simulation.

I found some 3D source code for adding vorticity confinement to Stam’s stable fluids here. See the fluid.cpp file inside the fire32.tar.gz archive.

At this stage I had 3D fluid working. Now comes the fun part, how to display the fluid.

Once you get the code working, the main issue becomes how to display the fluid.

Stam’s fluid uses what is known as an Eulerian approach to fluid simulation. Rather than track individual fluid particles (as in SPH simulations) the fluid is simulated by tracking velocity and density at fixed grid based locations in 3D space. This means that as the simulation runs you have a 3D grid of fluid properties that need to be displayed.

The method I use is to hide the cells that contain a fluid velocity lower than a threshold value. 0.01 seems to work OK for my tests. Then render the cells as spheres or cubes. Color shaded based on fluid velocities. 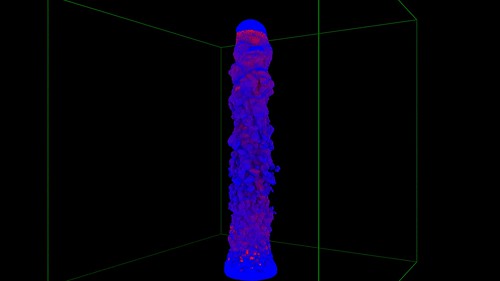 For a fake volume rendering like approach you can render the fluid using translucent billboard quads. If you run a pre-render pass over the array and strip any cell that is surrounded by other cells it results in only having the “shell” of the fluids rendering. Rendering these shells with the billboard particles gives a nice result. 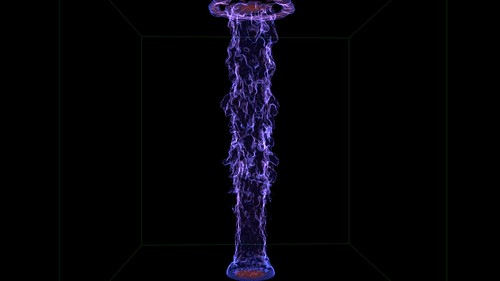