I first heard about Huegene after watching the following video from Dave Ackley.

1. Plants and herbivores rather than fish and sharks.

2. Plants cannot move like fish can. They spread through self propagation.

3. Herbivores have a probability chance of eating plants based on how close in color the herbivores and plants are.

Both the plants and herbivores have genes that determine their color.

When a new plant or herbivore is created it has a slightly mutated color from the parent. This results in plants growing in clumps of similar colors.

This is the main difference between Huegene and Wa-Tor. In Wa-Tor the sharks happily gobble up any fish they land on. In Huegene the herbivores have a probability of eating a plant based on how close in color they are to the plant. So a blue herbivore will have a greater chance of eating a light blue plant than a yellow plant.

Herbivores eat the plants around them with the most similar color, which leads to the less similar plants in the area being able to thrive which then have more resistance to the herbivores in the area. The herbivores also mutate and can adapt to eating the new plant colors. This feedback cycle continues as the plants and herbivores adapt to the changes in each other.

For the gene colors I use the following 3 options;

2. RGB. Each plant or herbivore has 3 color genes for red, green and blue.

3. Hue and Saturation. Hue is between 0 and 1. Saturation is between 0.5 and 1. For display the HSL(hue,saturation,1) value is converted to RGB.

The following three sections explain how these different gene methods are used to determine a probability of a herbivore eating a plant next to it.

Hue is a floating point value between 0 and 1. It is converted to RGB values for display.

The following code is used to determine if a herbivore eats a plant near it.

The difference takes into account the fact that the Hue values wrap around from 1 back to 0 on the hue color wheel. For example, if you have a plant hue at 0.1 and a herbivore hue at 0.9 you want their difference to be calculated as 0.2 and not 0.8.

I also added a “probability factor” in. If this is greater than 1 it lessens the chance of the herbivore eating the plant. If you get a simulation that the herbivores are too plentiful increasing this factor will help keep them under control.

Each plant and herbivore now has 3 red green and blue values that are used for display and the probability of the plants being eaten by herbivores.

Plants actively look for empty neighbor locations to spread into. Herbivores move at random rather than actively looking for plant neighbors.

This next movie extends 2D into 3D. Same logic and parameters as the 2D movie, just adding the third Z dimension into the calculations.

The next movie averages the colors of the cells for display. The simulation genes themselves are not averaged/blurred, just the display colors. This cuts down the color noise and allows the more general waves of plant types to be seen. Or maybe it doesn’t? Anyway, it is another option to experiment with.

Huegene is now included in Visions of Chaos.

Wa-Tor is a simulation of fish vs sharks in a toroidal wraparound world. It was devised by AK Dewdney in 1984 and published in Scientific American under the name “Sharks and fish wage an ecological war on the toroidal planet Wa-Tor”

The original Wa-Tor simulations took place on a VAX system with a display 80×23 characters in size. Each step of the simulation took a while to run (no exact time specs given). It is interesting to read in Dewdney’s article that to test a theory he had about the system he let a setup run overnight to see what happened in the morning. Now with a decent computer you can run these over thousands of cells in almost real time.

The world consists of a 2D array that wraps around at the edges. When you have the wrapped edges the world becomes a donut (or toroid) shape.

A number of sharks and fish are randomly distributed into the world.

Fish look for empty cells directly next to themselves (using a von Neumann neighborhood of neighbor cells directly north, south, east and west) and randomly move into one of them. If they are older than a specified breed age they will leave a child fish behind in their current location.

Sharks look for fish next to themselves and randomly eat one of them if found. When they move they will leave a child shark in their old spot if they are older than a specified breed age. If no fish are found they will randomly move into an available empty space. If they do not eat their starvation level increases. If they starve for too many steps of the simulation they die and are removed from the world.

If you balance the settings right this sort of simulation will continue to cycle indefinitely.

Wa-Tor is controlled by the following parameters the user can play with;

Fish breed age – how many simulation steps does a fish need to survive for before it can give birth to baby fish. For these simulations I used 3 cycles.

Shark breed age – how many simulation steps does a shark need to survive for before it can give birth to baby fish. 15 cycles.

Shark starve time – how many simulation steps it takes for a shark to starve to death if it does not eat. 10 cycles.

An alternative method is to allow fish and sharks to only move randomly.

Fish pick one of the 4 directions at random. If it is empty they move into it and potentially have a child. If it is occupied they do nothing.

Sharks also pick a random direction. If a fish is there the shark eats it. If the spot it empty the shark moves into it. If it is occupied by another shark the shark does nothing.

Here is an animated gif showing fish and sharks both moving randomly.

This was a quick idea I had. Each fish has a color assigned to it. When it has a child fish, the child fish has the same color with slightly different RGB values. This way you can see how a “family” of similar fish spreads.

Wa-Tor can also be extended to 3D. In the following movie the simulation takes place in a 3D cube of cells, but cells outside a centered sphere are hidden to see the inner structures more clearly.

In this next movie only the fish are visible and they are colored to show how fish and their offspring spread.

Wa-Tor is available in Visions of Chaos. 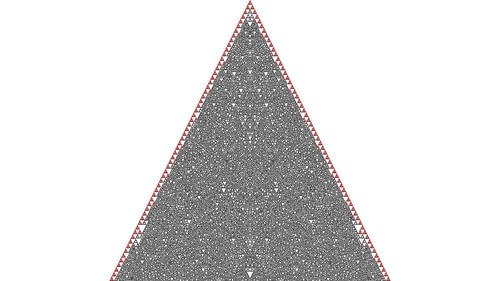 This is a new idea for a 1D cellular automata that came from Asher (blog YouTube). 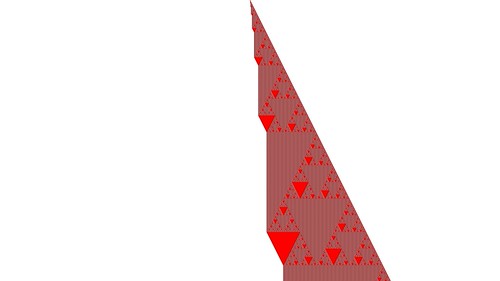 Trying to explain this clearly is harder work than programming it. 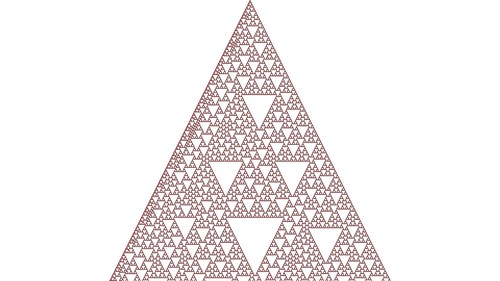 Combinations CAs can have between 2 and 10 maximum states per rule. 2 states means the cells can be either on or off. 3 states mean cells have 1 dead state and 2 living states.

The CAs are governed by a rule string.

An example 2 state rule is 0110 which creates the following;

An example 3 state rule could be 012120200 that creates the following result;

An example 10 state rule could be

which gives this result;

10 states is 100 characters. No need for decimal conversion as base 10 is decimal. So 1 with 100 zeros after it possible rules. That may as well be an infinite space to look for rules within. 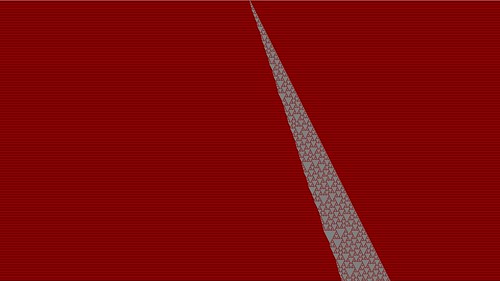 How the cells are updated

Each cell in the CA is updated by taking into account 2 cells from the previous step. These 2 cells are converted into a decimal value that is used as an index in a rule string to give the new cell state. I bet that makes loads of sense! Let me try and explain.

If the first step is a single center cell, then the values would look like;

Cell at ? looks at the cell above it and the cell next to it. These are 00. 00 converted to decimal is 0. So we look at the 0th entry in the rule string, so the cell value becomes 0.

Same for the next 3 cells

Then we get to the next ? cell

If you continue this process, you get the following result;

This CA also uses the brick wall neighborhood idea for selecting neighborhoods. See here for an animation of brick wall. Basically you shift the neighbor locations being checked every other line.

For the Combinations Cellular Automata in this post this means the location of the 2 neighbor cells changes every line.

For even lines you use the cell directly above and to the right. For example, in this next diagram the ? cell would use the 3 and 4 locations.

For odd lines you use the cell to the left and the cell above. This would be the 2 and 3 neighbor cells. 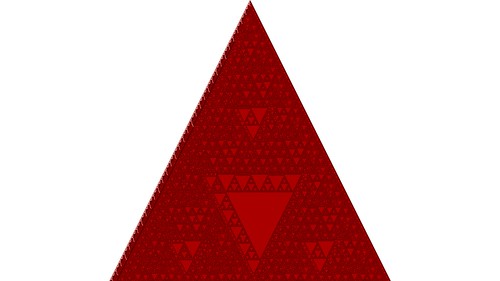 Rule 002200121 behaves similar to Wolfram’s Rule 30. During bulk runs of rules I have seen other results that also look like this one. 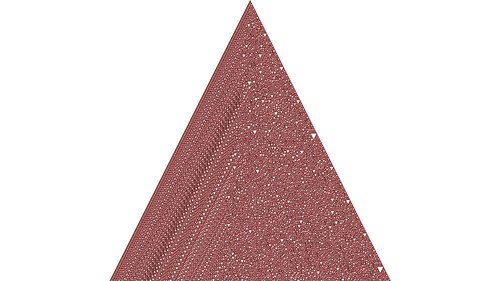 Another result that has been observed to occur are these “counting triangles” rules. These show similar behavior to Wolfram’s “Rule 225“. The splitting of bifurcation like structure on the right hand side is like a binary counter. This is rule 010221200. 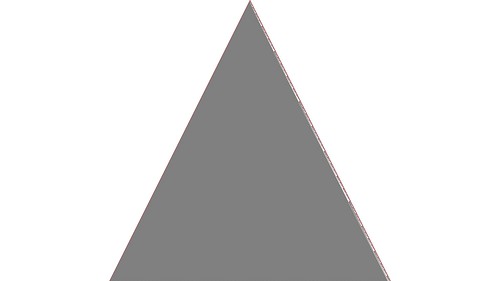 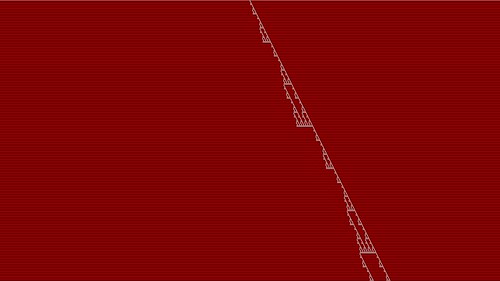 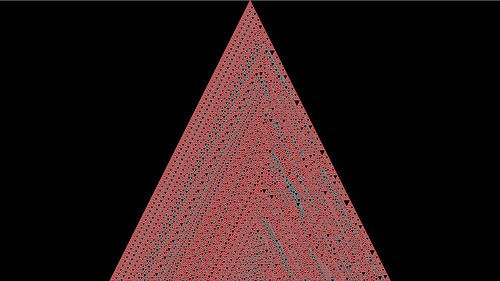 Combinations Cellular Automata are now included in Visions of Chaos.